To the Fruitvale Station 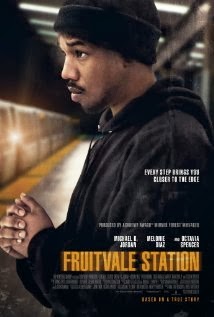 Thanks to the persistence of my wife who has insisted for some time that as residents of the East Bay we must see it in the theater along with fellow East Bayers, our whole family saw this remarkable film  a couple of weeks ago.  The film moved me to tears and then settled into my imagination where it has been ruminating since.  I'm not sure it is still in theaters, but if it is go see it now and root for writer director Ryan Coogler and The Fruitvale Station to get some Oscar nominations.  As has been well reported the movie takes up the last day of Oscar Grant, a young black East Bay man killed by a BART police officer during a bizarre and confusing encounter in the early hours of New Years day 2009.  Coogler, a 27 year old Oakland native, does not so much tell the story of Oscar Grant's death as set it in the contexts of his life, of what it is like to be a young black man in 21st century urban America, and also of the new geography of race and class in the East Bay.

The superb cast does an extraordinary job creating a full life for Oscar Grant (played radiantly by Michael Jordan who many GTC readers will remember from The Wire) as its last day plays out.  We meet his daughter Tatiana, played by Ariana Neal, his longterm significant other (and Tatianna's mother) Sophina (played by Melanie Diaz) and his mother Wanda (played by the amazing Octavia Spencer).  Sophina and Wanda, two strong adult women in his life, along with Grant's healing love for Tatiana, seem to be anchor cables that will keep Oscar, clearly going through a troubled patch with recent time in one of California's overcrowded and unhealthy prisons and losing his job, on positive path.  We also see how narrowed the economic space for working class men like Oscar seems in the East Bay.  Having his lost his job in a popular Oakland food store, we see Oscar driving through an urban landscape that appears to have lost most of its economic muscle.

One of the film's less obvious but insightful and significant dimensions is its portrayal of Oscar's male peer group as including a multi-racial set of young men in various locations in the crime, employment, incarceration landscape.  Resisting the overwhelming tendency of popular media to suggest that any criminally involved characters must be relentlessly and malignantly criminal, the film portrays the men overall as not only caring deeply for Oscar and being ready to be there for him in celebration and tragedy, but as providing an important resource for Oscar in finding employment, staying out of trouble, and remaining in a committed relationship.  The strong presumption that "bad apples" spoil the whole barrel has long legitimized "zero tolerance" policies in schools and mass incarceration policies on the streets.  Research I had the privilege to participate in drawing on life histories and interviews from young adults who grew up in Oakland's San Antonio neighborhood (not far from the Fruitvale BART station) produced lots of suggestive evidence that a diverse social network is a powerful resource to keep young adults in a position to access employment and educational opportunities.  An analysis of the data by my colleagues Deborah Lustig and Kenzo Sung, Birds of a Feather: Peers, Delinquency, and Risk (may require digital library access or pay wall) suggests that having close friends who have been involved in criminal activity or criminalization does not divert successful young adults who continue to know and benefit from contact with their delinquent peers without being "contaminated."

The East Bay, with its extraordinary diversity, unique history of racial and ethnic cross-alliances in labor and political struggles, and its potent and tasty civil-izing society of food, fresh in stores and wonderfully cooked in restaurants, lively streets, and yes, BART itself (too expensive but perfectly located for East Bayers) comes across beautifully in the movie.  If Fruitvale Station wins an Oscar nomination the nation may finally get a look at this extraordinary piece of itself that has long been a footnote between aging snap-shots of Berkeley in the 60s and celebrations of whatever San Francisco or Silicon Valley are up to next.

But if the film gives us reason to be celebrate the way civil society can heal itself, state forces, particularly police and prison officers, are powerfully and accurately  portrayed as nothing short of catastrophic for the security of the community.  Grant's prison experience, portrayed in flashback and then terrifyingly in real time (no spoiler here), highlights the racial gang system which compels virtually all California prisoners to "join up" for what passes for a social order in prisons that the state long ago abdicated any responsibility to maintain civilization in.  The fact that tens of thousands of our fellow citizens have passed through these degrading and racializing prisons is a shame that our state will live with for generations.  In the one scene in which we see Oscar strike a more menacing pose (toward the store manager who has apparently fired him some time ago), we can only wonder how time in the organized menace of the prisons now weighs like burden on his own sense of humanity.

The film's most searing portrayal is of course its close up on the conduct of the BART police.  Everyone knows the tragic way this ended, but the film offers a realistic view of how the attitude of relentless contempt that many police officers, not just BART police, project at young men of color (as documented by Victor Rios in his compelling ethnographic study also set in Oakland, Punished: Policing the Lives of Black and Latino Boys) sets up the conflicts that inevitably and too often lethally fall-out between them.  The film makes the rather unexpected but to my criminological eyes quite convincing choice to highlight that contempt rather than the still mysterious motivations of police officer Johannes Mehserle who was tried for Oscar Grant's murder and went to prison for manslaughter.

If the Fruitvale Station has a political agenda it is to dis-establish these destructive state apparatuses which are so costly and now stand in the way of a serious effort to reinvent urban security for the 21st century (consider the heavy handed policing of Oakland's monthly art murmers since a shooting last spring).  But for all its ethnographic realism, and critical edge, the film does the job of all cinema, perhaps all stories, turning the quotidian details of real people and places into the mythic material of a universal.  The film is  an elegiac invocation of both how much our lives are determined by forces beyond our control, but also how much power all of us have to change and to be a force for repairing and restoring our communities.  It deserves an Academy Award.


Posted by Jonathan Simon at 8:59 AM No comments: