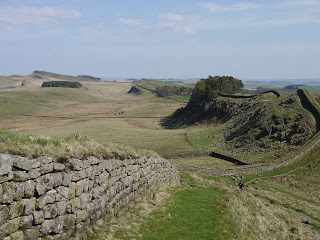 Earlier this month I went with my family for four days of walking through the countryside of Northumbria in the United Kingdom along some of the largest and most stunningly situated remains of what is known as Hadrian's Wall. Built in a remarkable five year period on the orders of the Roman emperor Hadrian (in power from 117-138) the wall originally stood fifteen feet high, at least four feet thick, 80 miles across the breadth of Northumbria from present day New Castle in the east, to Carlisle in the west, and along the west coast.

For a student of crime and social control the wall is a subject of endless fascination. We know it was built to significantly upgrade the security of Roman control over what they called Brittania (military documents left at the contemporary and nearby Roman fort of Vindolanda make reference to the locals as more or less "dirty little Brits"). Only a decade earlier a rebellion to the south, led by Queen Boudicca, had led to the trashing of several Roman cities including London, and the massacre of Roman civilians (in retaliation for abuses against locals). But Brittania was hardly the most dangerous outpost in the Empire, perhaps just the most dangerous one where a wall would be helpful because of the relatively narrow parts of the long island.

How was the wall supposed to work? It is tempting to view it as a security perimeter designed to separate an untamed North from the docile and controlled South (that feeds into much of the later historic imaginary of Scotland as a wilder and less tamed region). But we know that Boudicca's rebellion had come from the South. Moreover, the wall was part of a larger military zone which ran from a ditch dug just north of the wall, to an even wider ditch with raised ramparts running a bit further to the south. Indeed, Hadrian's Wall interacted with a previous infrastructure, the Roman military road which ran parallel approximately two miles south and along which the Romans had already constructed forts including Vindolanda and several others at which they stationed large units of auxiliary troops (so called because these units composed of non-Roman citizens were considered of lower status than the legions but almost equally well trained and led).

Instead of a barrier, the Wall seems to have been both a demonstration of Rome's sheer power (the amazing views we enjoyed reflect the fact that it was built across high ridges and crags where attackers or traders were unlikely to come but from where it could be seen for miles). It was also a demonstration of Rome's disciplinary technology, with defensive turrets and wall forts designed to control (and tax) traders entering into the Roman zone spaced every 1/3 of a Roman mile even where that placed them on top of a high crag that no trader would ever visit. It may also have been an instrument for introducing these disciplinary patterns into the Celtic populations along both sides of the wall. Whether coming from the south or the north, locals seeking to visit family or trade across the wall would have had to deal with the disciplinary matrix of the military zone along the wall and learn to conform themselves to its demands. Indeed, this aspect of the Wall seems to have survived its demise (Rome abandoned it and Britain in the 5th century) to linger in the cultural imagination of the British. For example the common reference in British usage to a fortnight (or two weeks) comes from the period of time during which Roman soldiers would rotate through duty on the Wall where they patrolled the along the wall and slept in the turrets and wall forts (thus fortnight).

There is a story of crime here as well in the Wall's survival. Although many of its well dressed outer stones have been robbed to build churches and farm houses, the fact that this area between England and Scotland was a zone frequently visited by raiding parties from both sides (some of them known as Reavers) kept the area from being more fully developed until union of the two kingdoms brought relative peace in the 18th century, at which time a sense of preservation about the wall had begun to develop.
Posted by Jonathan Simon at 3:03 AM