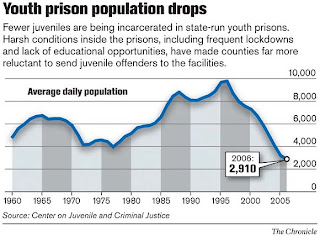 Imagine if after years of packing ever greater numbers of offenders into prisons lacking in rehabilitation and rife with interpersonal violence, county courts, realizing that public safety could never improve this way, decided to keep an increasing portion of its offender population at home and outside of bars, while investing in innovative rehabilitative techniques. Seem impossible? it has up until now to me. In Governing through Crime I argued that mass imprisonment is a policy held in place not by crime (or even its repressed others, racisms, class exploitation, etc.) but by changes in the structure of our political institutions around the problem of violent crime that had made the physical transfer of threatening populations a central tendency of governing late modern America. Yet as detailed in a recent series by James Sterngold in the San Francisco Chronicle (read it now) the scenario I began with has actually occurred in California, the carceral behemoth itself, only not in its adult system. Instead, the youth prison system, aimed at juveniles who have committed serious or violent crimes, after steadily growing through the 1980s and early 1990s, went into a steep decline after reports of abuse emerged in the mid-1990s, and today fewer than 636 of the more than 200 thousand juveniles arrested in a typical year are sent to a prison.

How did this happen? This is a story waiting to be told, and of vital importance to those of us most anxious to dismantle both mass incarceration and the culture of fear and control that sustains it. Here are a few speculative hypotheses (i.e. guesses):

An important part of this story is "Juvenile Justice Realignment," a financial incentive for diverting kids that legislators introduced in 1996.

Here's a brief discription from an excellent report by the Justice Policy Institute:

"Until 1996, counties paid a modest monthly fee of $25 to the state for each youth they committed to the
CYA, a fraction of the actual cost to the state for confining a juvenile. As this was less costly for the counties, these localities committed large numbers of youth to state facilities. In 1996, the California legislature responded to this problem by enacting a sliding- scale law that gave counties a financial disincentive for sending youth who had not committed serious offenses to the CYA.2 Under the fiscal scheme, counties pay the state on a sliding-fee scale based on the seriousness of the offense, with fees to send youth to the CYA increasing as the severity of the offense decreases. In 1996, at minimum, counties pay a fee of $150 monthly for sending any youth to the CYA.30 The current cost is statutorily set at $175, monthly. The full cost of incarcerating one individual for one year in the CYA is approximately $92,545.31"