Race and the Gang 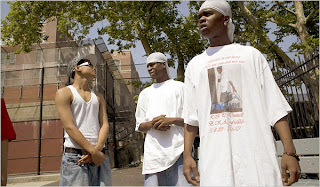 The overlap between crime and racialized fear in American society cannot be overestimated. Some forms of criminalization, however, are so deeply steeped in race that any responsible effort at assuring equal treatment under law would require prophylactic elimination of entire categories of criminal liability. This is especially true of gangs and the vast quantity of crime defined as gang related. Mostly the American media has bought the basic myth that gangs of young minority males are the core of the crime problem in America. Every once in a while, however, a story picks up on the deep irrationality and simple injustice of the way the "gang" problem is deployed by law enforcement. See, “Mass Arrest of Brooklyn Youths Spotlights Tactics.” New York Times (June 24).
Posted by Jonathan Simon at 9:27 PM