But its Illegal! Immigration and the False Premise of Crime Control 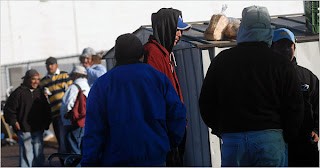 The most alarming trend in this election year is the growing body of sentiment that any effort to respond to the plight of millions of undocumented non-citizens working in the United States, other than by arresting and deporting them, constitutes an abandonment of the rule of law. Although the federal government backed off of a recent effort to heighten the criminalization of undocumented workers, state and municipal efforts are producing a growing body of mostly punitive laws.

Arizona's new law punishing businesses that knowingly hire illegal aliens with fines and eventual loss of their business license is typical and that in a state that depends on aliens, many of them undocumented, to sustain its large agricultural industry. (Read Randal Archibald's story on the Arizona law in the NYT)

But just because its illegal, does not mean that the problem of undocumented foreign workers is primarily a problem of crime. It is often true, for example, that homeless people sleeping in parks or on the street are violating laws and ordinances backed by criminal penalties. But rounding up the homeless and jailing them is a cruel and generally futile way to govern the problem of homelessness. Instead, the most innovative communities are finding that well targeted housing assistance combined with concentrated efforts to treat mental illness can make a difference. Choosing not to pointlessly punish the homeless for crimes that are a product of their situation does not sap our moral character or prove that we do not respect the law.

Likewise, our response to illegal immigration must begin with the recognition that the fact that it is a crime does not provide a satisfying strategy for addressing it. Indeed, unlike the homeless, who are often victims of extreme poverty, mental illness, and histories of substance abuse, undocumented workers are generally involved in producing goods and services of value to our society. Choosing not to punish them for breaking our laws does not diminish our moral character or weaken the rule of law.

There is another choice, one even more in line with our devotion to the rule of law. We should recognize that there is an under supply of law in this situation and move to remedy that. For example, new legal mechanisms could be established for ameliorating the often degrading and dangerous conditions that undocumented workers put up with. Giving them drivers' licenses as New York's courageous Governor Elliot Spitzer tried to do, was a good start. Bringing labor laws fully to bear to protect their working conditions and pay would be an excellent follow up. The workers would remain illegal, but the job conditions and domestic lives they lead would become less so. The rule of law would be expanded.
Posted by Jonathan Simon at 2:12 PM

Fight illegal immigration. Ask your elected reps to co-sponsor the SAVE Act. The House bil HR4088 has 122 co-sponsors and the Senate's S2368 has three.

This new law would force all employers to verify social security numbers. It also adds 8,000 additional BP agents to the border.

More details are found at NumbersUSA.