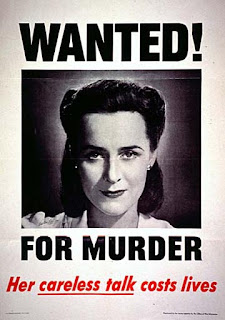 
The word comes up in these posts with some frequency. No crime is more important to the world view that produced and has sustained "governing through crime." We would not made capital punishment into the lynch pin of political respectability it is in America without this background obsession with murder. A war on drugs, would never have taken hold in this country without the sustained efforts of government, media, and official criminology, to claim drugs as the source of the criminality that ultimately leads to murder. Nor would the vast efforts undertaken by the American middle class to gate themselves away from stranger danger no matter what the cost in money or lifestyle if murder did not weigh on the mind.

In her brilliant cultural history of murder in America, Murder Most Foul: The Killer and the American Gothic Imagination, UC Davis historian Karen Halttunen documents that in the course of the 18th and 19th century, murder became the primary imaginary space for Americans to work out their conceptions of social morality in the context of a religiously diverse society. The 20th century assured enough waves of murder (the 20s and the 60s primarily) to give governing through crime a powerful tailwind (and it finally took flight after the '60s).

Most criminologists and others who believe our punitive culture is excessive, would rather talk about anything then murder. We emphasize that punitive drug crimes are the major reasons for prison crowding. But actually the harsh punishment of murder in America is a significant factor in the growth of imprisonment (as our opponents are happy to point out).

If there was good evidence to believe that mass imprisonment is what really broke the back of America's chronically high murder rates during our remarkable 1990s crime decline, it would be hard to argue with our harsh punishment generally and of murder in particular. But the evidence does not actually point to a strong causal relationship, (see my colleague Frank Zimring's book, The Great American Crime Decline, for the most careful effort to sift the empirical record).

Perhaps it would help us as a culture if we faced murder and decided to curb our appetite for punishment and security there first. After that it would be easy work to overthrow the gated communities, mandatory minimums, lock down schools, that characterize the America I describe in Governing through Crime.
Posted by Jonathan Simon at 6:26 AM