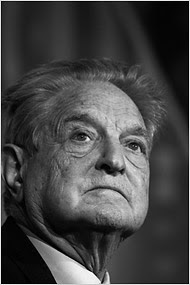 Today's New York Times Business section leads with an elegant black and white photo of the 77 year old face of George Soros, the global financier and philanthropist, with the story below headlined, The Face of a Prophet.

The article profiles the apparently widening gap between the Hungarian born Holocaust survivor's amazing financial acumen which continues to earn billions of dollars in the face of global economic problems, and his seemingly doomed quest for respect as a major economic theorist. His most recent book, his 10th, analyzes the sources of the current economic crisis, what he considers the worst of his lifetime (which includes the Great Depression).

Whatever the fate of Soros' economic theories, history will likely recall him for his striking commitment to democracy on a global scale. What is most impressive about Soros' efforts to be a prophet of (and finance) democratization, has been its specificity to the problems of democratic formation in different societies. In the former communist countries, his efforts focused on property rights and free speech. In the US, he was one of the first to see that the war on crime (and now terror) was endangering democratic institutions. Through the Open Society Institute Soros has for the more then a decade highlighted the danger that fear of crime and rampant mass incarceration was posing to American democracy. (A Soros Senior Justice Fellowship helped finance my time to research the book Governing through Crime, published last year, back in 2000)
Posted by Jonathan Simon at 7:26 AM