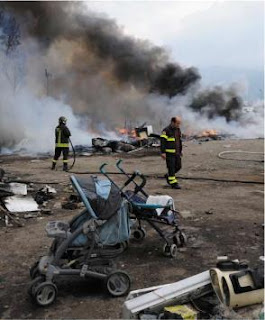 According to a recent opinion polls, 9 Italians out of 10 think that crime is rising in Italy (and 6 out of 10 hold the same point of view when asked about their own neighborhood); more than 50% identify immigration as the main cause of this increase; a majority of respondents say they would support “exceptional” measures to fight crime; 47% think that Gipsy camps should be cleared once and for all by the police – whether alternative housing for their occupants is made available or not.
However, this appears to be something more than just a matter of volatile opinions and floating views: when given the chance, some people have taken what they see as “justice” in their own hands against those whom they see as the immediate threat to their security and wellbeing. In the last few months – mainly in the poor and desolated peripheries of Rome and Naples, where most camps (and temporary housing for immigrants, more generally) have been established by the local authorities, in a clear attempt to make them invisible to decent citizens – racist attacks have multiplied.
Sometimes an over-amplified criminal episode has been taken as the pretext for these assaults, as in the case of Ponticelli near Naples, where last May hundreds of enraged residents almost managed to lynch a young gipsy girl accused of attempting to “steal” a baby from inside a house, and then set the nearby gipsy camp on fire destroying it entirely and forcing all its inhabitants to take refuge somewhere else. In other cases, the simple fact of being foreigner, black and poor has been enough to mobilize residents against immigrants, as in the case of Pianura – once again, near Naples – where this week 107 immigrants recently evacuated from a building they had illegally occupied, were prevented by enraged neighbors from moving into their newly assigned temporary housing (an abandoned school); at that point – in a desperate act of protest remindful of the 1995 sans-papier movement in France – the immigrants occupied a church in Naples, only to be attacked and dispersed by the police.

On the other hand, the Berlusconi III government is acting fast and furious against these internal enemies, promoting the idea that the fears of “exasperated” citizens must be taken seriously: after fingerprinting all the gypsies (and their children) – unleashing strong critiques from EU bodies, such as the European Commission, the Council of Europe and – most recently – the European committee on human rights – the Italian government has now adopted its “security package”: a comprehensive anti-(immigrant)crime legislation which, among other things, provides that:
1) Punishments for crimes committed by “illegal immigrants” are increased by up to 1/3
(a blatant violation of the principle of equality before the law, as established both by the Italian Constitution and by the European Convention on Human Rights);
2) Immigrants can be detained in “Identification and Expulsion Centers” for up to 18 months (formerly, the maximum period was 60 days);
3) European citizens can be deported from Italy whenever local authorities (e.g. majors, police chiefs) identify them as dangerous for public safety and public order (this measure had been already adopted by the former center-left government in order to be able to deport immigrants from countries recently admitted to the EU, such as Romania and Poland);
4) Almost 3000 soldiers will be deployed with public order responsibilities in several Italian cities (Rome, Naples, Milan; Palermo, etc.). Of them, 1000 will be assigned to “sensible targets” (foreign embassies, governmental buildings, etc.), 1000 will monitor immigration detention centers from outside (to prevent escapes), and the remaining 1000 will patrol cities (jointly with civilian police officers) with powers to identify and arrest suspects.

Finally, this is taking place without any significant parliamentary opposition to these measures – indeed, (due in part to an irrational electoral law), for the first time in the history of the Republic (1948-?), since the 2008 elections the left (green, socialist, social-democratic or post-communist) is not represented in the parliament – which means that any institutional resistance is now in the hands of the newly constituted (and very moderate) “Democratic Party”.
Meanwhile, the latest polls show that the popularity of the Berlusconi III government (and of Berlusconi himself as premier) is growing to levels (more than 60%) never touched by his predecessor Romano Prodi, nor by any recent government in Italy.
The question looming over critical observers of the punitive turn in Italy is not new: “democracy at work” or “authoritarian populism”?
Posted by Jonathan Simon at 7:19 AM