Detroit Journal: Does America Need another Black Man in Jail? 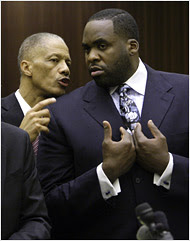 Yesterday Detroit's former mayor, Kwame Kilpatrick, began serving a four month sentence in the Wayne County jail. There is plenty of drama to the specter of the former leader of the city whose extroverted celebrity like life style was often a source of talk in the city (Read the NYT story by Nick Bunkley) now occupying Cell 143-4 of his home town's jail. Kilpatrick's romantic extramarital affair (detailed in a huge number of text messages), his efforts to cover it up by trying to get some police officers fired (sounds like Sarah Palin), and his brief shove with a police officer during one of his court proceedings (upgraded to "assaulting an officer" in his criminal case) were all tawdry and perhaps a bad example to the boys and girls of the once Motor City.

Still, does Detroit, does America need another Black man in jail? One who was a middle-school teacher, was twice elected mayor and helped lead a nightlife boom in the city's depressed downtown? Is he a danger to anyone living in Detroit? Is it so essential to send a harsh deterrent message to adulterers or those who would manipulate their work place power to cover up their mistakes?

I for one cannot understand what purpose of policy or justice is served by locking the man up at tax payers expense for four months. Nor can I imagine that Bill Clinton or any other white politician drawing time for the same conduct.

(By the way I don't favor sending an old White man like Ted Stevens to prison either, just take all his money and leave it at that!)