Crown Prince of Crime Control? A Ray of Hope in a New Cabinet 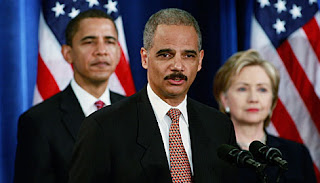 As American government was transformed around the problem of crime in the 1960s, one of the most significant and fateful development was the morphing of the attorney general into the nation's "top law enforcement officer." Once a quasi-judicial officer with a special brief to defend the rule of law within the administration, the attorney general became a veritable crown prince of crime control, astride an ever growing law enforcement and punishment behemoth (at least until the formation of Homeland Security cleaved off some chunks, but that's another story).

Actual attorneys general have varied in how much they took up that potentiality. Some from both parties emphasized crime fighter aspect, including Robert Kennedy (who served under JFK and LBJ) and Edwin Meese (who served under Reagan). Others were more concerned to restore the rule of law job (like Ford's AG, Edward Levi), or were simply too involved in political machinations to bother (like the recent Alberto Gonzalez).

There are some encouraging signs that new appointee Eric Holder may be more in the Ed Levi camp than the Ed Meese (and G-d knows the rule of law could use some bolstering).

Eric Holder has the talent and commitment to succeed as attorney everyone from his first day on the job, which is even more important in a transition that demands vigilance. He has distinguished himself as a prosecutor, a judge, and a senior official. And he is deeply familiar with the law enforcement challenges we face from terrorism to counterintelligence, from white-collar crime to public corruption.

During his own remarks, AG nominee Holder seemed to suggest a wider range of interests then crime.

I also look forward to working with the men and women of the Department of Justice to revitalize the department's efforts in those areas where the department that's unique capabilities and responsibilities in keeping our people safe and ensuring fairness and in protecting our environment.

When Holder did mention crime in his statement, he emphasized the lead role of state and local government, a good sign, since leaders at the state and especially the local level have a much more nuanced view of crime problems and can craft less harmful solutions.

We will need to interact with our state and local partners in new innovative ways to help them solve the other issues that they confront on a daily basis. National security concerns are not defined only by the challenges created by terrorists abroad but also by criminals in our midst, whether they be criminals located on the street or in a board room.