Is Pot the Answer? 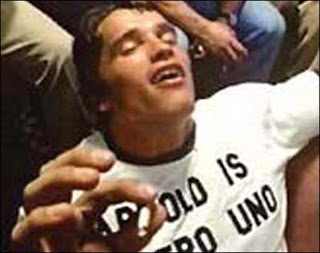 What was the question again? Just kidding, in proper doses (and for those of the right age) marijuana is a largely benevolent drug in my view that can enhance insight and creativity (although not short term memory). Can its decriminalization or even legalization help unwind our prison mess and address the budget deficit?

Marijuana's direct impact on the prison population is hard to gauge. Relatively few people are in a California state prison today for simply possessing marijuana. Some are there for marijuana sales (which presumably would diminish under the legalization scenario). However marijuana is a major (in some states the major) cause of arrests. While those arrests do not lead directly to prison, they do lead to jails, and to a record that can in time make a person go to prison. In that sense marijuana is a gateway crime the criminalization of which pulls people deeper into the criminal prosecution system.

Legalization or decriminalization could both reduce the tension that is produced between police officers and those they find marijuana on, and thus make it easier for police to interact with the public and solve more serious crimes. Even more significantly, as an experiment in civil governance, a well regulated system permitting legal sale and use of marijuana (such as exists now in California for medical marijuana consumers) would be a huge confidence builder in our ability to shrink the criminal system without undermining public order (indeed with improvements in public order).

As for our deficit, I don't have the numbers at my fingertips this morning, but well taxed marijuana, even if a lot of money were devoted to enforcing civil regulations on pot, would bring millions if not billions into state coffers. It is at least as morally worthy a source as the lottery.

The good news this morning is that Governor Arnold Schwarzenegger was quoted Tuesday as welcoming a debate about marijuana legalization (read Wyatt Buchanan's reporting in the SFChron). Like our new President, the Governator knows first hand that marijuana is no great threat. The former weight lifter famously takes a hit off a joint at the triumphant end of the popular documentary, Pumping Iron.
Posted by Jonathan Simon at 7:01 AM

Police are constantly closing the medical marijuana supply stores in Bakersfield. Just this week the t.v. news media showed the police closing a store as people were arriving to purchase.

This unlimited police control over people's life must be stopped.

I remember voting to make it legal for medical marijuana to be sold with a prescription. Then please tell me why police have the right to go close those stores when they have done nothing illegal?

When it comes to the parole department they are like a virous that you can't find a cure for. I agree it is time to shut that agency down. Start providing assistance to a paroled prisoner to help them in society. The parole dept. operates now like secret police department who throw people back into the prison system without even so much as a hearing to prove their guilt.

I agree it is high time to legalize and decriminalize the use of marijuana.