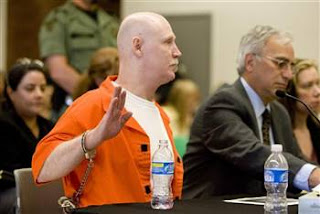 Here's what haunts me about this picture of Utah prisoner Ronnie Lee Gardner raising his hand to take the oath before testifying in front of a clemency board. It's not that Gardner, who had already spent 25 years in prison for killing a stranger during an attempted courtroom escape, has to plead for his life at a time when in virtually every other nation on the planet he would be up for parole if not already released from prison. It is the water bottle. Why did the state of Utah put a plastic water bottle in front of this killer they hated so much they wanted to kill him? Why not let him plead for his life with a dry throat? Why not let him struggle to move a tongue thick with the enormity of his task through a mouth dry with the yawning gap of eternity opening before him? By placing that plastic water bottle in front of Gardner, Utah may have only meant to assure that his words would be understood by the clemency board or properly documented by the transcribers. But maybe, just maybe, Utah coudn't help noticing he was a human being.

According to Jennifer Dobner of the Associated Press (read it on MSNBC here):

Shortly before the shooting, Gardner was strapped into a chair and a team of five marksmen aimed their guns at a white target pinned to his chest.

Posted by Jonathan Simon at 7:27 AM