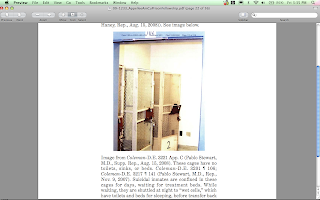 One of the big take aways for me of the Plata oral argument was the very explicit mention of human rights and the unnamed but palpable presence of dignity values in the 8th Amendment. Justice Breyer described the conditions in the underlying Plata and Coleman cases (dealing with physical and mental health respectively) as presenting "a big human rights problem". That was not a phrase used by the briefs for the prisoners, and it was not repeated during the oral argument, but it underscored a palpable sense among many of the Justices (a majority) that the underlying denial of adequate medical and mental health care was horrifying (Breyer uses the term "horrendous") and beyond the range of ordinary prison condition litigation.

Justice Breyer invoked this sense of horror by talking about a photograph he had seen in an amicus brief filed by a group of religious organizations. I believe he was referring to this:

It is from one of the filings in the Coleman case, involving failure to adequately treat mental illness, and it depicts cages "without toilets, sinks, or beds" in which suicidal prisoners were confined for days awaiting treatment. Justice Breyer's questioning of Mr. Philip's indicates that these photographs cut through the record as a whole for him, and the Justice challenges the advocate to show him something in the record that proves the state is able to make that horror go away without the population cap ordered by the 3-Judge court.

JUSTICE BREYER: What would I look at to find this? It's a big record. What I did was I -- it refers to on-line evidence, and I went and looked at the pictures, and the pictures are pretty horrendous to me. And I would say page 10 of the religious group's brief, for example, shows you one of them. (20) ...

Interestingly, Carter Philips, for the state, not only did not challenge the depiction of the treatment of prisoners as horrendous and a human rights violation, he embraced it, describing the core constitutional violation involved as:

culture of disregard for the inmate

While suggesting that the conditions were a lot better (without showing the court was clearly erroneous in finding otherwise) Philips acknowledged that the problem was a distinctive and radical, justifying the unprecedented quality of placing the entire prison health care system under a receiver rather than the more typical special master.
Posted by Jonathan Simon at 7:17 AM