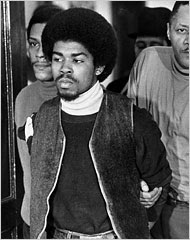 Although its a premature anniversary year, and there is plenty more to "celebrate" (if thats the right term) looking back forty years to 1968, Catrin Einhorn's reporting in this mornings NYTimes about an extraordinary plea bargain in Chicago, brought that year and that place back to me with a cold awakening.

It was my first full year back in the city of my birth. We had moved in the summer of 1968, sometime between the deadly riots that had followed Martin Luther King's assassination in April and the less lethal but spectacular events in the streets outside the Democratic Party's national convention in August. Both waves of violence had involved heavy handed police brutality.

As 1969 dawned, the city was divided and dismayed. Long a bastion of the national Democratic Party, the campaign that began in that ruinous convention had ended with the election of Republican Richard Nixon (who may have had Mayor Daley's tacit support but not his affections). For African Americans, long held to a humiliatingly thin slice of the city's racially hierarchical machine politics, the King riots had opened up a chapter of new vulnerabilities. The Chicago Police Department, dominated by sons of the city's Irish, Italian, and Polish neighborhoods, had always been a force of terror for African Americans. The Mayor's "shoot to kill" order during the riots took that to a war like level that would culminate in December of 1969 in the execution style slaying of Black Panther leader Fred Hampton by a unit of the Cook County State Attorney's office (read the Wikipedia article on Hampton).

Hampton's murder, which I remember reading about in the Sun-Times over a bowl of breakfast cereal, scared the hell out of me. A pudgy 10 year old from a Jewish left-wing family, soaked in post-Holocaust consciousness, it seemed quite plausible to me that if they could murder a leader of the city's huge black population in his bed, they could build camps and gas a few unpopular lefty Jews with impunity (and hadn't Daley called Abe Ribicoff a "Jew Motherfucker" on the floor of the convention after Ribicoff explicitly compared the Chicago Police to the Gestapo).

In March of 1969, in an event that I have no memory of but fits a like glove in the sequence of that terrible year, Joseph Pannell, then 19, fired a bullet at Terrence Knox, then a 21 year old Chicago Police officer. Knox survived but has suffered from the wound in his arm ever since. The officer testified that he was asking the black teenager why he was not in school (but he was 19?). Pannell, long known in Canada, where fled on bail from the crime, as Gary Freeman (clever), may have been a member of the Black Panther Party in Chicago, and according to one of his earlier lawyers, shot in self defense.

The plea bargain that brings this case to light, and to an end, has all the feel of a movie. Pannell, arrested in Canada in 2004, gave up his fight for extradition, impressed he said, by what it meant that the current Mayor Daley (son of Hizzoner), had endorsed Barak Obama for President. Terrence Knox, who left the Police Department for a career in business, questioned what would be gained by spending hundreds of thousands of dollars to prosecute and imprison a man who had lived a crime free and socially responsible life ever since. So instead of up to 23 years in prison, Pannell and his family are coming up with $250,000 (that better be Canadian!) in a donation to a relief fund for families of wounded Chicago Police officers. Mr. Pannell will spend 30 days in jail and two more years on probation.

The resolution has drawn comparison to a bribe, but it has many attractive features, practical healing, appropriate atonement, dignity and parsimony. The Pannell/Knox case seems an especially appropriate sign as we move toward the anniversaries of a sequence of events that began 40 years ago this spring, when assassinations of Martin Luther King, and a few weeks later, Robert Kennedy, would produce riots and a terrible new kind of federal crime bill, and soon, a law and order administration in Washington. By the following winter when Joseph Pannell shot Terrence Knox (March is winter in Chicago, believe me) a war on crime had begun in earnest on the streets of Chicago and other large cities. Forty years of casualties have accumulated, too many of them wandering the corridors of state prisons or on death rows, while the community pays an ever higher price to keep them locked up.
Posted by Jonathan Simon at 9:43 AM