What's a Mayor to Do? Right on Ron 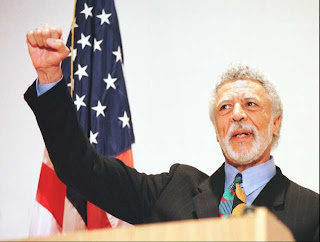 Ron Dellums, a Bay Area legend for his twenty-plus years in the House of Representatives where he made a national reputation as a critic of American war policies, now finds himself sinking in America's greatest quagmire, its war on crime. A series of highly publicized gun crimes have angered and embarrassed a city that has long struggled for a measure of recognition for quality of life, arts, and culture as against its famous neighbors, San Francisco and Berkeley. The California Senate President Don Perata, was carjacked in Oakland while dropping off a Christmas present for a friend. Less than a month later, a 10 year old was paralyzed during a piano lesson by a bullet that came from a gunman across the street robbing a service station. The perception that crime is growing out of control (seven homicides this last weekend) is building inexorable pressure on the Mayor to announce some kind of crackdown (typical is the sniping of Chron columnists Matier & Ross).

It is a measure of Dellum's strength that he has not rushed to announce some dramatic but improbable strategy in the fashion of his equally crime-troubled predecessor Jerry Brown (but then he was already focused on further office, Dellums, who came out of retirement to run, is done after this). One hopes, however, that behind the scenes he is meeting with his outstanding Police Chief Wayne Tucker to develop the quieter, longer-range strategies that can work.

First, Oakland needs to break down these crime patterns on a block-by-block basis and develop policing deployments that can bring the maximum pressure to bear at the right times and locations to deter assaults. Second, the mayor needs to use his formidable leadership to mobilize corporate, state, and federal funds for a massive effort to engage Oakland's legions of children and youth living in poverty this summer in a host of age-appropriate educational, employment, and public service opportunities. There is a sense of desperation among the very poor for whom George Bush's (until recently) invisible job crisis and now the subprime housing crisis, have hit hard. Finally, the mayor has to speak out about both the causes of crime in Oakland and the reasons why Oakland needs to forge a strategy to reduce it that expresses the city's own deep values of diversity, integration, and public participation.
Posted by Jonathan Simon at 7:00 AM

But...announce a dramatic but improbable strategy to deal with the situation is exactly what Dellums did. And he's asking for nearly $8 million to pay for it!