Subprime Prisons: Pay Your Debt to Society and then Pay Some More 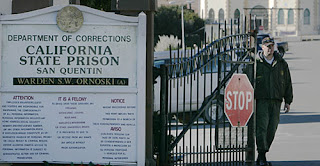 We need to hold offenders accountable! How many times have you heard that soundbite accompanying efforts to enhance prison sentences for one crime or another. Prison alone, it would seem, is capable of delivering on the law's promises and threats. And yet, the more you look at the prisons created by this fetish for imprisonment, the more you see that accountability is just another myth.

The latest example comes from California's distended prison system, which at roughly 173,000 inmates is approaching 200 percent of capacity and court-ordered population caps. As reported by Jordan Rau in the LATimes, the prison, which promises to hold wrongdoers accountable, cannot account for itself. With antiquated computer systems, inmate data has been unable to follow inmates through their frequent transfers among prisons. While crime has gone down for more than a decade, prison populations have continued to go up as sentences increased and inmates returned to prison from parole for technical violations often unrelated to crime rates. Perhaps the ultimate symbol of the system's basic lack of interest in accountability is its recent admission that more than 30 thousand inmates were held beyond their lawful sentence because administrators miscalculated their time served.
Posted by Jonathan Simon at 6:56 AM

"While crime has gone down for more than a decade, prison populations have continued to go up as sentences increased"

C'mon Jon. Crime went down as a direct result of those increased sentences. You make it sound as though crime just dropped all by itself. How did THAT happen?

ALSO, NOBODY BUT YOU has claimed there are "as many as 30,000" affected by bad date calculations. The figure being tossed about is 20,000. But, it's only an exaggeration amid a sea of lies...

"...inmates returned to prison from parole for technical violations often unrelated to crime rates." What does that mean? Are parole violations, technical or criminal, supposed to have some relationship to "crime rates?" If so, why?

FYI, the majority of those parole violators apparently sent back for doing nothing wrong tested positive for illicit drugs other than marijuana. Now, you're the fancy-pants professor so you tell me, is it possible to ingest meth or cocaine without possessing it? Is possession of those substances a felony? Doesn't that make those "technical" violations crimes?

How do you suppose these overwhelmingly unemployed offenders get their meth? I will tell you: thay commit other crimes to get their dope. That's what is called drug related crime. Ever heard of it? Assuming "technical" violators commit crimes as I am saying, don't you think locking them up prevents those presumptive deeds?

Tell the truth, Jon. It won't set you free and it can't be used to justify freeing convicts like your bogus rhetoric!

PS- Thanks for your recent comment on my blog. Feel free to continue. AND, if you think you can take the inevitable heat, send me your best anti-incarceration argument and I will post it without edits.

ALSO, as much as I HATE defending CDCR managers, you have completely misrepresented the time calculation discrepancies and how they came about.

You should be ashamed but, then again, judging by the passion with which you misrepresent the facts, I'm certain you are not.

I was asked a question today to which I honestly do not know the answer. Is a convicted felon sentenced to a term in prison permitted to bypass parole or structured release and serve his or her full sentence so the eventual release will be without conditions? The question was aimed at the concept of "I will do my time and I don't want the government in my face when I get out?" This is an option available to inmates? Jeff Taylor