Governing Tigers: Behave Yourself or Beware 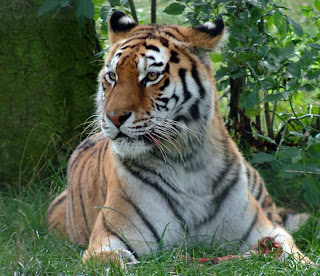 Readers of this blog will recognize the pattern. A major (or minor) public (or private) institution fails to protect its constituents (or customers, or clients), and then compounds failure by making self-serving misstatements and lies. Faced with sudden questions about its competence (or legitimacy), the institution and its leaders look to see if there is some kind of personal irresponsibility connected in any way to the failure and the damages caused by that failure.

In New Orleans, when thousands of dependent people were left unprotected from the aftermath of Katrina, and nearly drowned in the process, it was looting (of which there was predictably some) and then claims of rapes and murders (which proved utterly false). In Los Angeles, after this fall's damaging wildfires, it was a ten year old playing with matches who prosecutors were considering charges against. In San Francisco, after a Siberian Tiger escaped from its pen on Christmas day and mauled three teenage visitors (one fatally), the Zoo compounded its failure to respond promptly and effectively to the escape (the cat was eventually shot to death by police officers, but only after chewing on its victims for sometime after officials learned of the problem), by mis-stating its own precautions (the trumpeted 18-foot wall separating the cat from the visitors turned out to be 12 feet). Zoo leaders also quickly turned to blaming the injured visitors, claiming that only extreme provocation on their part could explain the cat's sudden motivation to escape the cage (even though a year earlier the same cat ate the meat off the arm of a keeper who was engaged in a public feeding of the cats).

In today's SF Chronicle, Patricia Yollin, Tanya Schevitz, Kevin Fagan report on the Zoo's continuing effort to push that story. On Wednesday, witnesses emerged who claimed to have seen as many as four teenagers "taunting" the tiger, although it is unclear whether these apparently misbehaving teens were the same unfortunates who met the tiger's claws and teeth.

How much taunting can a tiger take? I'll invite your speculations, but as long as I've been going to zoos, kids (ok, boys especially, of all ages to my observation) have been drawn to taunting big cats. Maybe that is irresponsible or even cruel behavior, but it is utterly predictable and perhaps even capitalized on by zoos (like SF's which has made its cat feeding one of its biggest draws for years).

Although taunting zoo animals is apparently a misdemeanor, SF Police (who were able to down the cat within minutes of their arrival during the Christmas escape) seem skeptical about the provocation theory. Police Inspector Valerie Matthews noted: "I don't know if what they did was any more than what kindergartners do at the zoo every day." Police did apparently find an empty vodka bottle in the car in which at least some of the injured visitors arrived (read the AP story).

Look to Zoo officials to continue to focus on the crime story even while doing the environmental security fixes that should have been done decades ago. Perhaps the whole saga is no big deal (visitors flocked to the still open Oakland Zoo the day after the tragedy). But the SF Zoo is only a small part of the mentality of governance which prefers to emphasize the role of personal responsibility in managing risks of all kind.

Don't feel threatened by tigers? How about earthquakes, wildfires, and hurricanes?
Posted by Jonathan Simon at 3:52 PM