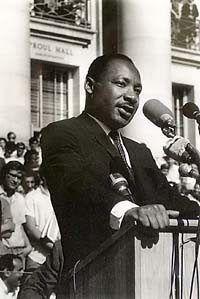 You cannot look at the devastation that governing through crime has brought to America, and especially to Black America, without wondering what Martin King might have done about it, had he lived.

First start with the central fact that had King lived, he might have been able, even under President Richard Nixon (who after all embraced affirmative action as the black capitalist alternative), to negotiate the kind of federal follow up to the Civil Rights Act of 1964 that would have substantially reduced America's ghetto poverty in the following decade. This tidal wave of progress might not have fully diverted the wave of criminal violence that was already unfolding in American cities in the 1960s, but it would have created an effective example of governing through opportunity and progress that might have bolstered activist government against the crushing pessimism that became the legacy of the 1970s and which made governing through crime a survival strategy for both conservative and liberal politicians in the 1980s.


Instead, King's murder, coming just weeks after the murder of Robert Kennedy, and less then five years after the murder of President John Kennedy, added immeasurably to the sense that lawlessness was overtaking American civilization and at the heart of our cities (each of these murders took place in the downtown section of a major American city). This impression was significantly bolstered by the fact that each crime was ultimately blamed on individual bad actors, strange drifters without apparent links to the massive interests which benefited from these deaths.

Combined with the murders of other civil rights leaders earlier in the decade, including Medgar Evers and Malcolm X, the killing of Dr. King must have sent a particularly spirit-killing message to the young Black men of America. Criminal violence seemed to be frustrating the demands of justice at every turn. In the meantime apostles of violent response within the Black community seemed to be vindicated. In California, the Black Panthers, no doubt aided by the FBI and the California Department of Corrections, degenerated into a real criminal organization, the Black Guerilla Family which became an influential force in California's prison culture. Since then, big parts of two generations of young black men have been lost to the streets and the prisons. Since then the "two America's" that the Kerner Commission glimpsed in the embers of the riots that followed King's murder, have girded into a society of prisons and gated communities that increasingly look like one fearful and unfree America.

It will take leaders like Martin King to bring us home from the Exodus of the War on Crime. But don't look for that leadership in the Presidential campaign. It will have to come from below. From someone who is even now working in a community like Oakland, Memphis or Montgomery. Someone who is gathering around them a yet invisible but swelling tide of people who believe that they see our needs as a society and as a generation, in a new light.

"Come back to us... Martin Luther King, we are marching into Selma, while the bells of freedom ring."

(with thanks to Steve Earle for his wonderful song, Christmas in Washington)
Posted by Jonathan Simon at 8:03 AM