Young, Black, Male, and Ready to Govern through Crime 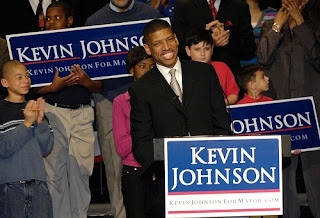 Carolyn Marshall of the The New York Times reports in the paper today about the bitter run-off campaign for Mayor of Sacramento (the low self esteem state capital of California). The race between former NBA start Kevin Johnson (an African American man brand new to politics) and the incumbent Heather Fargo (a white woman with a career of public service) which ended in a run off after California's primary last week has garnered national attention (not least because of its odd similarity to the Democratic nomination fight that just ended).

Less remarked upon in the national press is the fact that Johnson has made crime, and the need for a more aggressive law enforcement approach to it, a centerpiece of his campaign.

As reported last month in the Sacramento Bee:

To hear Kevin Johnson tell it, Sacramento is a violent place.

Mayor Heather Fargo's main challenger in the June 3 election has made public safety a primary focus of his campaign. He says Fargo is "out of touch" with the increasingly dangerous reality of life here. He has pledged to tap federal and state funds to put additional cops on the street.

Fargo accuses Johnson of "fear mongering" to boost his mayoral bid. She says the city is employing groundbreaking methods to reduce crime and is doing everything within its power – and its budget – to address the issue.

"I'm not saying we don't have problems, but I don't think it's the job of the mayor to make people feel unsafe in their city," Fargo said Wednesday. "I want people to feel good about where they live."

Johnson said he decided to focus on crime after talking to residents in the weeks before he entered the mayor's race.

"I was out talking to people in the community, and that was their top concern," he said. "It was an issue that came up over and over and over again."

A poll conducted for The Bee and KXJZ News earlier this month confirmed that public safety is on voters' minds. It edged out the economy, the city budget, traffic and growth as the top concern of those polled.

Those who would view the war on crime as largely a reflection of white anxiety about race need to develop a theory of why successful Black politicians also govern through crime (think Michael Nutter in Philly or Ray Nagin in New Orleans).
Posted by Jonathan Simon at 11:38 AM